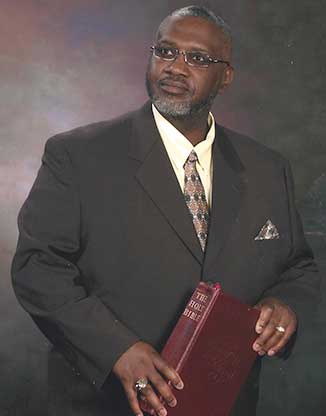 He was educated in the Richmond County School System. He attended Levi White Elementary, Bungalow Road Elementary and Ursula Collins Elementary Schools. He attended T.W. Josey Junior High School and graduated in 1980 from T.W. Josey High School. While at Josey, he played football, basketball and ran track. He was President of the Student Council his senior year. He was voted Most Likely to Succeed and Most Business Like of his senior class. He began his post-secondary education at Morehouse College, Atlanta, Georgia. He later transferred and completed his Bachelor Of Arts Degree from Paine College in May/1985, with the 5th highest grade point average in his class. In continuing his quest for higher education, he enrolled and graduated from Georgia Southern University with a Masters Degree in Adult Education in September, 1995. After accepting the call by God to preach the gospel, Rev. Edwards enrolled in Erskine Theological Seminary and graduated with a Master of Divinity Degree in August 2000.

He accepted Jesus Christ at an early age at the Summerville Baptist Church of Augusta, Georgia. While at Summerville, he served as a Sunday School Teacher, Sunday School Superintendent, Church Secretary and Church Treasurer.

After much prayer and seeking God’s guidance, he joined the Good Shepherd Baptist Church of Augusta, Georgia in January 1996. It was at Good Shepherd that he received and accepted his call into the ministry. He was licensed to preach in April 1997. At Good Shepherd, he served as a Sunday School Teacher, Bible Academy Instructor, and Wednesday Night Bible Study Teacher.

In 1999, he accepted the call to serve as the Interim Pastor of the Oak Grove Baptist Church in Girard, Georgia. Wednesday Night Bible Study was reestablished with an emphasis on members becoming students of the Word.

He officially began his tenure as Pastor of the Friendship Baptist Church on January 1, 2005. He is a member of the Concerned Ministers Fellowship of Aiken, SC.. He has served the Aiken community as a past president and member of the Board of Directors for the City of Aiken Police Athletic League (PAL).

Rev. Edwards has been employed at the Savannah River Site located in Aiken County for 32 years. His present position is Instructor Technologist. He has served in the past as President, Tobacco Road Elementary School; Vice-President, Sego Middle School; and President, Citizen Advisory Board to the Richmond County Board of Education.

There are no upcoming events to display at this time